Sunburned and a bit dehydrated I continued my exploration of artistic environments and met up with a friend to visit to Muscle Beach on the Venice Boardwalk. I knew that this stop on my Roads Scholarship adventure would likely be the most directly relevant to my thesis work. I promise pretty soon I will begin to discuss my thesis work more in depth but for now I want to make sure I recount my experiences so I can come back to them when the time comes to actually start writing. I have mentioned though how I am dealing with hypermasculinized culture of sports as well as athletes and the use of body to represent identity. Muscle Beach, from what I have heard and knew about it, is perhaps one of the most in-your-face examples about how athletic bodies are displayed and the identity of the athlete is performed. We throw around that word performance a lot in sports as a way of discussing how well someone played or how fast they went or how far but we seldom use it in the way it is typically used in the art world. We mean very similar things when we use it in either context but I want to make note of that. Art world and sports worlds rarely collide but Muscle Beach is arguably the most blatant example of how similar they really are. Muscle Beach originally formed in Santa Monica and has recently been moved to Venice, which is the location I visited. It is located on the boardwalk, which I found to be a bit touristy but at the same time a place of culture. Tourism is interesting because many locals will tend to avoid it but at the same time there must be a reason why those stops are chosen as representations of the location. Anyways, the pier is crowded with people of all sorts of backgrounds. I was told that this is another place where people go to be seen. As I recall from previous trips to LA this is somewhat of a normal thing. There are spaces that are functional and efficient and spaces where people go to look at each other. This was definitely the latter.

I approached the gym section of Muscle Beach as soon as I set foot on the boardwalk. There were large vibrant orange signs and bright blue chain link fencing that enclosed the weights area. My approach to visiting this site was to first observe and then if I could get myself to do it participate in this sort of performance. I scoped out the area and recorded my observations. The gym area was much smaller than I expected, housing various machines, some free weights, and some open rubber floor space. Nothing that stood out as exceptional from what I have seen. The machines were also clearly used and weathered, which is likely a combination of their constant use and the fact that this gym is outdoors. Along with the gym being smaller than I expected there were also not very many people using the equipment. For whatever reason I pictured such a famous location being packed but there were only a handful of people. Despite the physical size of the gym itself I do not want to downplay the grandness in which the location was presented. The signs were huge, the concrete façade was huge, and the crowd was huge.

The people using the gym equipment were of a variety of ages. Some clearly muscle bound and in their prime and a few that had perhaps been using this gym ever since it started back in Santa Monica. There were also only men. For those that were clearly in their prime and fitting in with the body-building legacy of Muscle Beach the gym acted as a sort of stage. Many people would gather outside the fence with strollers or cameras and stop their walk down the boardwalk to watch. There formed a crowd, as the athletes would perform their exercise routines. After a set of whatever exercise the audience would even applaud and cheer for the men in approval. Occasionally a guy would be about to perform a difficult round of an exercise and would even walk around and work the crowd before attempting his lift. Others would put in their headphones and not acknowledge the crowd but would occasionally glance over to see who was watching. Some even walked up to the gates to take pictures with their onlookers while others seemed content just having people take pictures of them subtly.

Before I settled on where or if I would be participating I continued to observe and map out the grounds. I moved from the glamorous gym crowd and came across a series of five bleachers that were angled towards a center point of a raised platform. A large archway stood atop the highest tier and appeared to be a giant barbell made of tan-grey concrete. I perched myself on top of one of the bleachers like I used to for any high school football game I pretended to watch and again observed. This was a much more quiet space. A few people sat and watched the gym from a distance and had casual conversations with people. There were a few signs up the bleachers advertising the founder of Muscle Beach and it’s historic significance. I asked my friend after I recorded and reflected into my thesis notebook and he told me about how this was the stage they used for body-building competitions. From what I was told apparently they do a series of photo shoots at the gym and them parade out from under the massive arch as people sit in bleachers and the surrounding area to observe, take pictures, and cheer. It sounded like Jersey Shore meets Honey-Boo-Boo, which would absolutely amazing but for right now the stage was vacant. The archway served as a frame for the gym for people to watch.

Behind the bleachers was a large area of sand with gymnastics equipment where others were working out. The best way I can describe this area is that it looked much like an adult playground and seemed to operate in a very similar way. I saw people interacting with each other as they worked out and people seemed to be here with friends. Unlike the gym where everyone stayed within themselves or engaged the crown this space seemed to be much more playful and open. People worked out with people they may or may not have known and walked around much more freely. People challenged each other to different exercises or acrobatics on the equipment. This seemed to be much more of what I was looking for in terms of the interactions between the athletes as they performed.

For whatever reason I felt much more comfortable participating in this environment. I took my shirt off to blend in for research…who am I kidding I took it off because I did enjoy the sort of showing off aspect of this space. There were ropes to climb, gymnastics rings, parallel bars, and a few beams that were scattered around the sandy space. I started climbing everything in sight, doing handstands on the rings and bars, and things that I didn’t even know I could do. As I was upside down on the rings I noticed that a few people had come over and were blatantly taking photos of me and would wait for me to go again once I lost my balance. I personally did not mind this attention as I am comfortable with my body but I found it a bit strange at how out in the open it was. Maybe it was my research mindset that reminded me constantly that I should be aware of how I am recording data and who I am including in my research. I am constantly asking myself if I need to ask someone to sign a waiver or consent form or if it’s okay to use my own observations and leave it at that and here is some guy snapping pictures and getting good angles as I’m hanging upside down and working out. It’s this conflicting feeling because I am entirely okay with this situation but know that I very well could feel vulnerable. There is this confidence in my body and performance where I was embracing this interaction. I wonder where those photos will end up or why they were being taken but then again that man probably has no consideration of how I am using that wordless interaction for my own documentation.

Ultimately this was such a great experience and something that I will definitely be coming back to when it comes down to officially writing my thesis. I also think it’ll be useful to inform what kind of work I do or how my thesis will manifest in a physical way. I definitely want there to be an art component and a self-reflexive auto-ethnographical work. I’m sure I’ll be coming back to these thoughts and memories.

For more history on Muscle Beach please check out their site here! 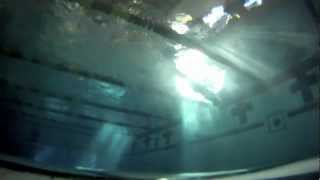